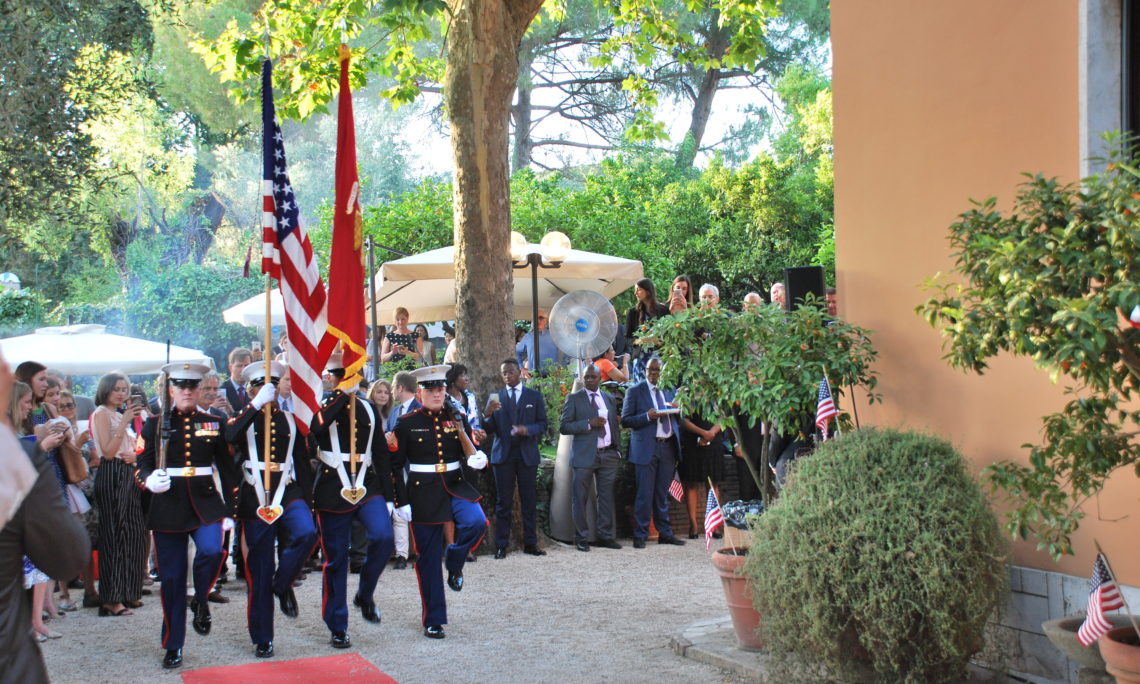 Thanks to our wonderful singer, Soprano Fabiana Rossi.

Also representing the Department of the Navy are members of the US Naval Forces Europe Band: Musician Second Class Colin Greggs on the guitar, Musician Third Class Jeremy Sauer on the bass, and Musician First Class David Stapp out there in the crowd, engineering our sound.

I believe both groups are available for photos – and autographs.

A huge thanks to our sponsors, who have helped us greatly in putting tonight together.  And also a shout out to Embassy Rome, who take care of us around the clock and were particularly helpful in taking care of tonight’s set up and security.

Nothing here tonight would work without the expert direction of Chef Marco Bruni, who has added at least 10 pounds in extra weight to each Duffy family member.

And, finally, none of this would be possible without the extraordinary organizational abilities of Ms. Terry Stefani, who has been working on this event for months.

Ambassadors and Representatives, officials from the Rome-based UN and international organizations, friends and colleagues: welcome to this celebration of the 241st anniversary of the signing of the Declaration of Independence.

Anne, I, and our two children – Tommy and Elena – have now been living in Rome for just about a year.  In the United States, we live in Alexandria, Virginia, about four kilometers north of George Washington’s home and farm, Mt. Vernon.

Washington easily spent as much time on agriculture as he did on politics.  In a 1794 letter, the man known as the father of our country wrote:

I know of no pursuit in which more real and important services can be rendered to any country than by improving its agriculture, its breed of useful animals,

and other branches of a husbandman’s cares.

It’s as if George Washington was writing the mission statement of the UN Food and Agriculture Organization!  Sometimes it seems like the founding fathers thought of everything!

Across the board, the UN and other international organizations in Rome provide what Washington characterized as “real and important services” whether it is FAO’s contributions to Agriculture, the World Food Programme’s work in feeding the hungry, or the International Fund for Agricultural Development’s providing the financial base that ensures sustainable development.

We here at USUN Rome also have the honor of working with three other agencies:  the International Development Law Organization, the International Institute for the Unification of Private Law, and the International Center for the Study of the Preservation and Restoration of Cultural Property, helping to promote the Rule of Law and safeguarding historical and cultural heritage.

It’s been an eventful year, but we have an even bigger year ahead of us, with challenges – such as famine – that we thought had been conquered, only to see them come roaring back.

Many of our organizations have new leaders, and we are all being tested to see if we can match the accomplishments of those whose foresight and abilities brought those organizations into existence.

In fact, our newest leader was selected today, and let me offer our congratulations to the new FAO Independent Chairperson of Council Mr. Khaled Mehboob.

Tonight is also our chance to farewell April Cohen, leaving us for our Embassy in Morocco as well as Rob Mearkle, leaving us to return to Iraq.  We also bid farewell to Nancy Estes, who came back from retirement to help us over these last several critical months.  We welcome Ms. Emily Katkar, who be taking over April’s role at head of our political/economic section.

In words attributed to Socrates:  Nobody is qualified to become a statesman who is entirely ignorant of the problem of wheat.

This, ladies and gentlemen, is not a crowd ignorant of the problem of wheat!

I ask you statesmen to please raise your glasses and join me in a toast: 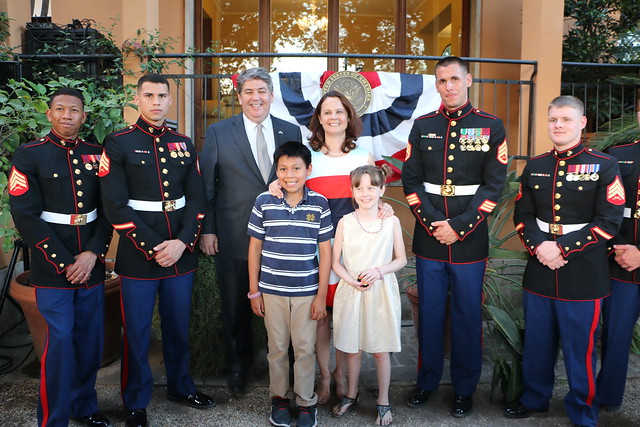