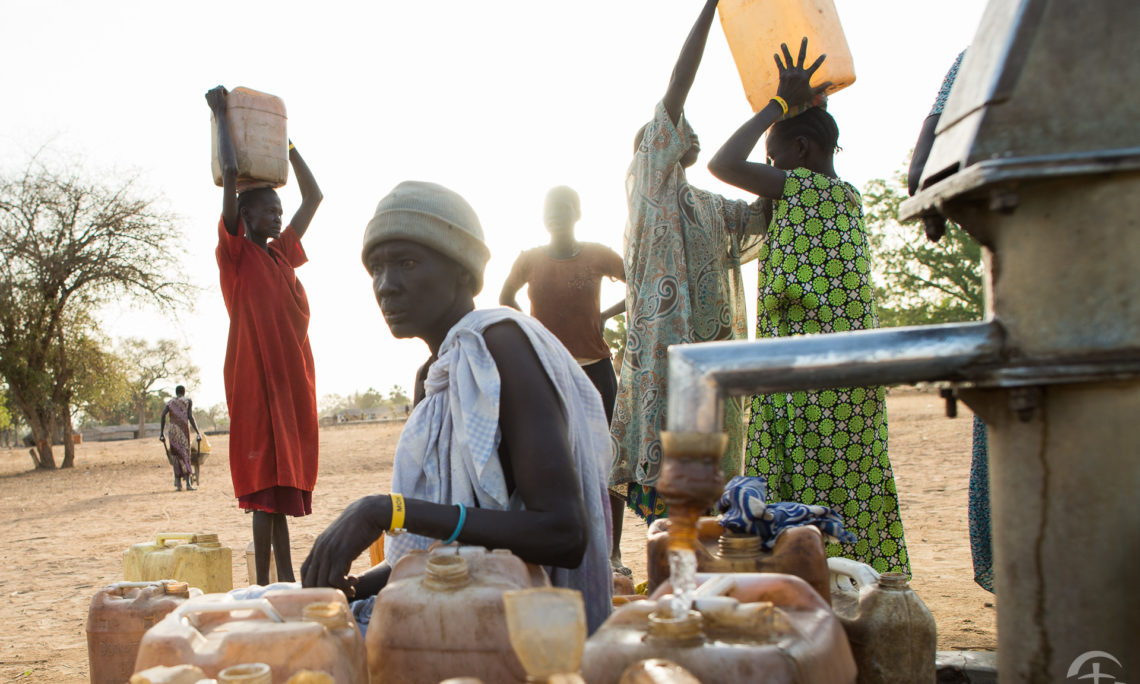 For vulnerable and conflict-affected populations residing in South Sudan’s Mayendit County, one of the famine-affected counties in Unity State, access to safe drinking water often requires long, arduous hours of walking to the nearest borehole. Due to insecurity and the amount of time required to reach clean water, many individuals in Mayendit frequently resort to drinking dirty, stagnant surface water, such as from puddles or rivers, that may have also been used for bathing, washing clothes, and cleaning kitchen utensils.

The swampy, flood-prone terrain in Mayendit makes it nearly impossible to transport large mechanical rigs to the area to drill for water. However, USAID Office of U.S. Foreign Disaster Assistance (USAID/OFDA) partner Samaritan’s Purse recognized that access to safe drinking water was essential in combatting the effects of acute malnutrition and improving the health of communities in Mayendit and decided to bring in a water drilling system that uses human energy in place of a diesel-powered engine—a valuable tool in an area where fuel is in short supply and more complicated machines can be difficult to repair. Samaritan’s Purse trained local staff to operate the manual drill and then the team got to work, drilling boreholes throughout Mayendit so that residents of the county could more readily access clean water.

In payams where Samaritan’s Purse drilled boreholes, communities formed water management committees to properly look after the water pumps, instruct local mechanics how to maintain and repair the water pumps, and galvanize residents to contribute 10 South Sudanese pounds—approximately 9 cents—each month to save for pump repair costs. In one payam, Nyaluak, a local woman heading the water management committee, shared that she and the community realized the value of having safe water access close to their homes, stating, “This borehole is not meant only for us, but for generations to come.”

The USAID/OFDA-supported manual water drill supplied by Samaritan’s Purse is bringing communities in Mayendit closer together, uniting them in their shared responsibility of caring for the boreholes, and reducing the likelihood of unsafe water sources causing intestinal or waterborne diseases or worsening the prevalence of malnutrition. Already, Samaritan’s Purse has facilitated the drilling of 11 boreholes throughout the county, providing clean water to approximately 5,500 people.