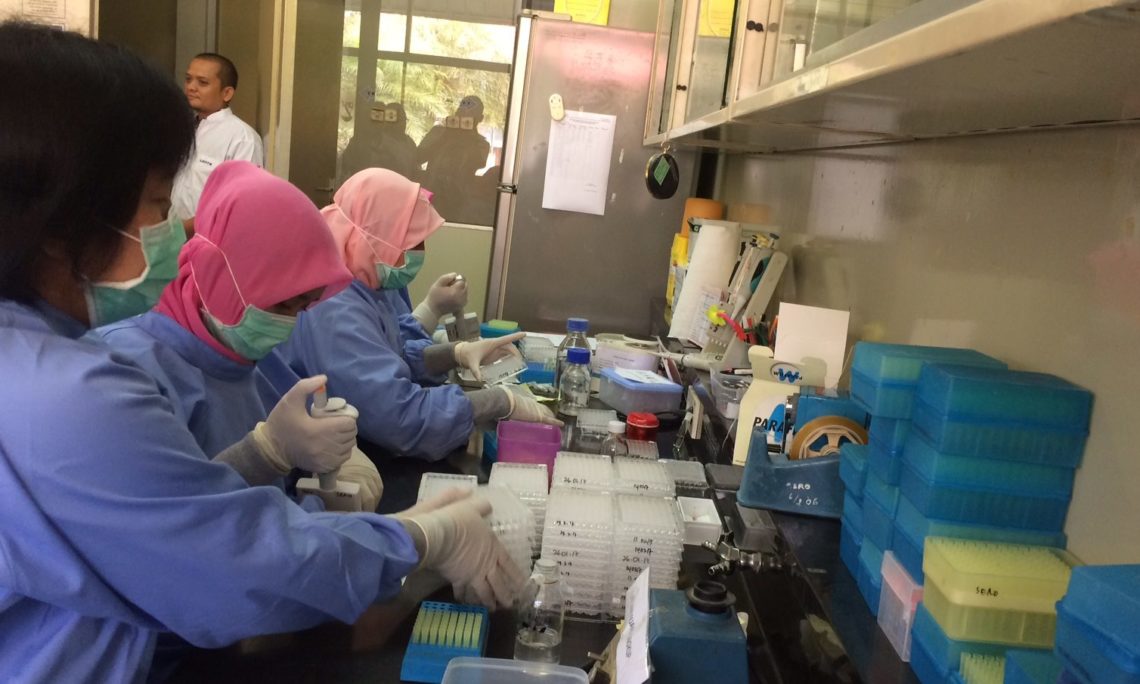 Over 4,700 veterinary professionals in 25 countries trained in just one year

9 March 2018, Rome – A United States-FAO partnership working to strengthen the capacity of developing countries to manage outbreaks of diseases in farm animals has in just 12 months succeeded in training over 4,700 veterinary health professionals in 25 countries in Africa, Asia and the Middle East.

All told, 3,266 vets in Asia, 619 in West Africa, and 363 in the Middle East benefitted. They are on the front line of the effort to stop new diseases at their source. (Full list below)

“Over the course of this relationship we’ve learned that there are many mutually beneficial areas of interest between the food and agricultural community and the human health community,” said Dennis Carroll, Director of USAID’s Global Health Security and Development Unit.

“A partnership with FAO not only enables us to protect human populations from future viral threats, but also to protect animal populations from viruses that could decimate food supplies. It’s not just a global health, infectious disease issue, but also a food security, food safety, and economic growth issue,” Carroll added.

“Some 75 of new infectious diseases that have emerged in recent decades originated in animals before jumping to us Homo sapiens, a terrestrial mammal. This is why improving adequately discovering and tackling animal disease threats at source represents a strategic high-ground in pre-empting future pandemics,” said Juan Lubroth, FAO Chief Veterinary Officer

“A proactive approach is absolutely critical, and for that, the world needs well-trained, up-to-speed professionals — biologists, ecologists, microbiologists, modellers, physicians and veterinarians — which is why the United States’ consistent support for building up that kind of capacity has been invaluable,” Lubroth said.

A new study just published by USAID’s Dennis Carroll and experts from several institutions including FAO suggests that just  0.01 percent of the viruses behind zoonotic disease outbreaks are known to science.  The authors have proposed an international partnership, The Global Virome Project, aimed at characterizing the most risky of these. Doing so would allow more proactive responses to disease threats, with benefits not only for public health but also for the livelihoods of poor, livestock-depending farming communities.

The close FAO-USAID partnership on animal health goes back over a decade.

Experts from the two organizations are meeting in Rome this week to review progress achieved in the past year and how to respond to threats like species-jumping zoonotic illnesses and the growing trends of antimicrobial resistance and options for intervention measures in food production and protection of public health.

In addition to trainings, via the USAID- Emerging Pandemic Threats (EPT) programme, FAO conducts research and advises on policy in order to help countries increase their resilience to disease emergence and protect animal and human health.

And to enable rapid responses by governments to disease events FAO has leveraged USAID support to work with the United Nations Humanitarian Response Depots to establish a series of emergency equipment and gear stockpiles in 15 countries that facilitate rapid and adequate responses to outbreaks.

FAO is also key player and advisor to the Global Health Security Agenda (GHSA), a growing partnership of over 60 countries, NGOs and international organizations working to improve early detection of and responses to infectious disease threats. USAID support under the GHSA umbrella is helping FAO engage with 17 countries in Africa and Asia to strengthen capabilities to detect and respond to zoonotic diseases.

Thanks to USAID support for the EPT and GSHA, FAO is actively tackling disease issues and building national capacities in over 30 countries

Beyond the risks posed to human health, animal diseases can cost billions of dollars and hamstringing economic growth.

For example, the H5N1 outbreak of the mid-2000s caused an estimated $30 billion in economic losses, globally; a few years later, H1N1 racked up as much as $55 billion in damages.

Not to mention that for millions of the world’s poorest people, animals are their primary capital assets — “equity on four legs”. Losing them can push these families out of self-reliance and into destitution.

The United States of America and FAO

Pre-empting the next global pandemic