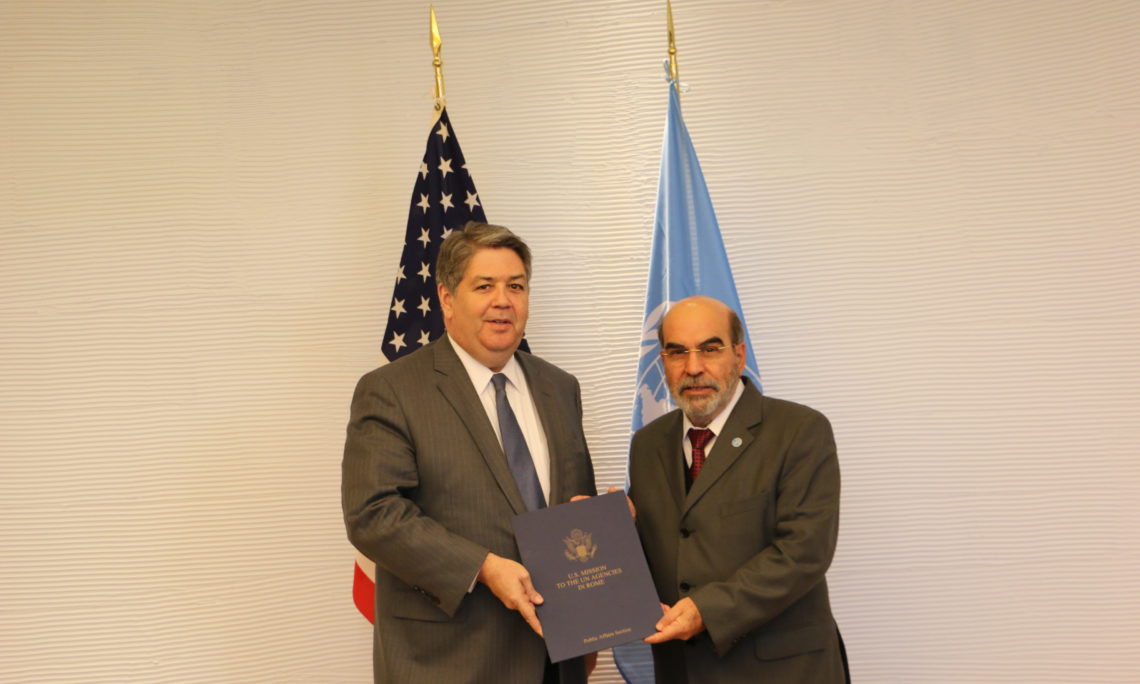 USUN Chargé  d’Affaires Thomas Duffy deposited the instrument of ratification by presenting it to the Director General of FAO José Graziano da Silva at FAO headquarters in Rome, Italy on March 13th.

Ready access to plant genetic resources – that is, seeds, bulbs, roots and other materials from which plants can be reproduced — is needed to meet the daunting challenges of feeding a growing global population, combating environmental degradation and constantly evolving pests and diseases, and facilitating continued productivity of agriculture in the United States and worldwide. The Treaty establishes a stable legal framework for international exchange of plant genetic resources for food and agriculture, benefiting both the public-sector and commercial interests, and promoting U.S. and global food security through the conservation and sustainable use of plant genetic resources for food and agriculture.  Joining this International Treaty will mutually benefit U.S. agriculture and the global agricultural community.

The U.S. Department of Agriculture has long been recognized as a world leader in conserving and distributing plant genetic resources. For more than 70 years, our National Plant Germplasm System (NPGS) has distributed samples to plant breeders and researchers around the world without restriction. The NPGS’s collection includes more than 500,000 samples, representing more than 15,000 species.  Most of the NPGS’s genetic resource collection will be placed within the Treaty’s Multilateral System for Access and Benefit-sharing, continuing the U.S. tradition of facilitating access to plant genetic resources for conservation, research, and breeding.

By joining the Treaty, the United States and U.S. entities can access the plant genetic resources covered by the Multilateral System on fair and predictable terms. This will enable U.S. farmers and researchers to improve crops, thereby promoting food security for future generations.

The United States looks forward to working with U.S. agricultural stakeholders and international partners, to continue to strengthen the International Treaty on Plant Genetic Resources for Food and Agriculture to conserve the resources needed for agricultural productivity, resilience, and food security.