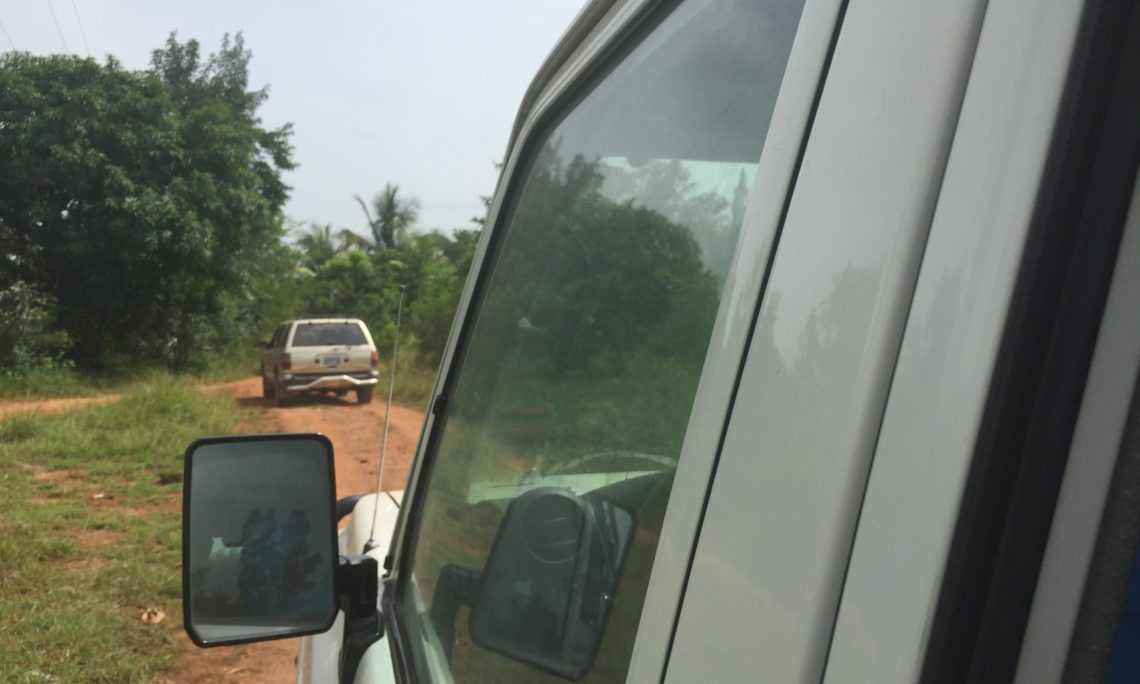 On the way to a Farmer Field School in northern Haiti. Photo by Heather Eaton.

Getting out of Rome and into the field to see international humanitarian projects in action is an essential part of representing the United States at the United Nations food and agricultural agencies in Rome. Visiting the operating grounds of these projects and meeting beneficiaries allows us to see firsthand how U.S. contributions to organizations like the World Food Program and the Food and Agriculture Organization (FAO) of the United Nations can change lives for the better.  That’s why I jumped at the opportunity to visit Haiti last month with a group of diplomats from other donor countries.

Our group flew into Haiti from the Dominican Republic (DR), which shares the island of Hispaniola with Haiti. Although they are neighbors, they seem to function as two different worlds. Besides obvious linguistic and cultural differences, Haiti faces some of the most severe development challenges in the Western Hemisphere, while the DR has the fastest growing economy in Latin America. Haiti is making great strides to recover from the devastation of the major earthquake in 2010, Hurricane Sandy in 2012, and droughts in 2015 and 2016. However, just last year, Hurricane Matthew caused considerable damage in southern Haiti to the agriculture, livestock, and fishing sectors, which together account for the livelihood of two-thirds of Haitians.

Although the FAO country office is located in Port-au-Prince, their focus on enhancing rural incomes means most of the projects donors like the United States fund are located far from the capital. During our trip, we spent most of our time outside of Cap-Haitien, a port city on the northern coast, visiting development projects known as Farmer Field Schools.  Bumping along on rural roads, we saw big creole pigs, houses lining the hilly landscape, and women carrying large baskets of laundry or fruit on their heads, painting the unique scene that is rural Haiti.

The UN-supported Farmer Field Schools are designed to increase rural incomes by training farmers to produce, process, store, and market agricultural products. In one location, farmers learned how to properly store peanuts to avoid aflatoxins, poisonous carcinogens produced by certain types of mold. They also learned how to make peanut butter and peanut brittle, which adds value to the raw peanut product, boosting the profit margin by 20 percent! In addition to benefitting from higher incomes, the farmers’ children now have an added source of nutritional food.

At an aquaculture Farmer Field School, FAO member states helped restore the livelihoods of local fishermen who lost their nets in Hurricane Matthew by teaching them to hatch and raise fish in ponds. One fishmonger told us that the local production of fish has saved her from having to make arduous trips across the border into the Dominican Republic to purchase fish, saving her time and money and boosting her profits. This FAO project also provided cold storage to the fishermen, so the fish they purchase stays fresh longer and does not need be discarded if it is not sold. With the additional income, farmers said they can now afford to send their children to school and even to university.

FAO has also helped local dairy farmers to organize into a cooperative, helping members care for their cows, test milk for impurities, pasteurize the milk, and process it into dairy products with added value such as yogurt drinks. This project transformed dairy farming from a subsistence venture into an income-generating business for local farmers.

Our visits to Farmer Field Schools showed us how global donors operate through FAO to help rural communities increase their incomes. Because agriculture is a critical part of developing economies, support from the United States for projects like these is essential to helping Haiti achieve long-term development goals. I returned to Rome with a better understanding of Haiti’s development challenges and a greater appreciation for the United States’ important contributions to UN food security programs.

About the Author: Heather Eaton serves as a Public Affairs Officer at the U.S. Mission to the UN Agencies in Rome.

This entry originally appeared on DipNote, the U.S. Department of State’s official blog.

This entry also appears in the U.S. Department of State’s publication on Medium.com.