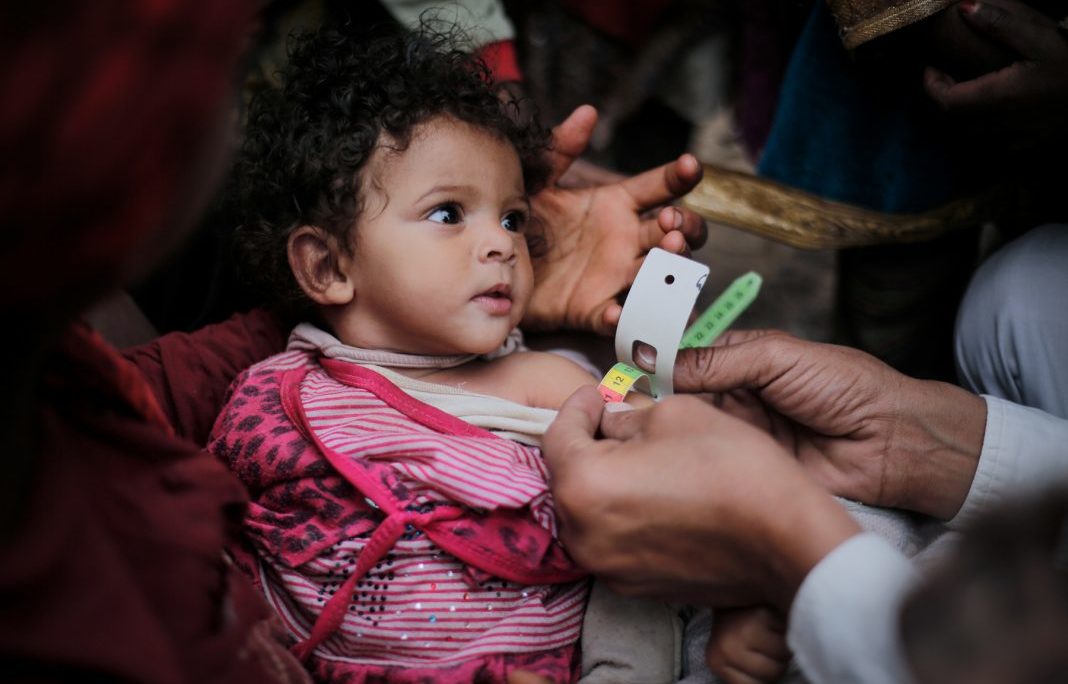 In Yemen, more than 2 million children are malnourished, including this young girl who is being treated by UNICEF. (© UNICEF/Almang)

Food, medicine and other relief supplies will be reaching people in need in Yemen more quickly, with the help of U.S.-funded cranes at the Hudaydah port on the Red Sea.

“These cranes are offloading key supplies for the people of Yemen and will allow greater throughput of critical humanitarian assistance and goods,” U.S. Department of State spokeswoman Heather Nauert said in a February 9 statement.

U.S.-funded cranes are helping to deliver blankets, sleeping mats and other supplies, like these in a United Nations warehouse in Yemen. (© Giles Clarke for U.N. OCHA/Getty Images)

The United States recently partnered with the U.N. World Food Programme to purchase four mobile cranes to help unload critical supplies in Yemen.
In Yemen, people are facing both a food crisis affecting almost 18 million people (PDF, 169 KB) and a widespread cholera outbreak. More than 22 million people are in need of humanitarian aid. Yemenis rely on imports for almost all of their basic needs, including food and medicine, and these imports arrive largely by ship.

“Right now, it takes around a week to unload a large cargo ship,” Gurmeet Philora, a logistics officer with the U.S. Agency for International Development, said in a January USAID post. “The cranes will cut that down by three or four days because each crane can move up to 60 metric tons at once,” Philora said.

The four cranes also can increase the capacity of the port by up to 40 percent, ”which means 40 percent more food, medicine and other relief supplies for people in need,” Philora said.

The United States is the largest humanitarian donor to the people of Yemen, having provided them more than $1.3 billion in humanitarian assistance since 2015.

“The arrival of the cranes is a positive step,” Philora said, “but they are just one part of our overall humanitarian efforts in Yemen. There are a lot of humanitarian needs in Yemen, and we will continue working with our partners on programs to provide water, food, treatment for malnourished children, emergency medical care and other life-saving aid to millions of people.”

This story was originally published by ShareAmerica