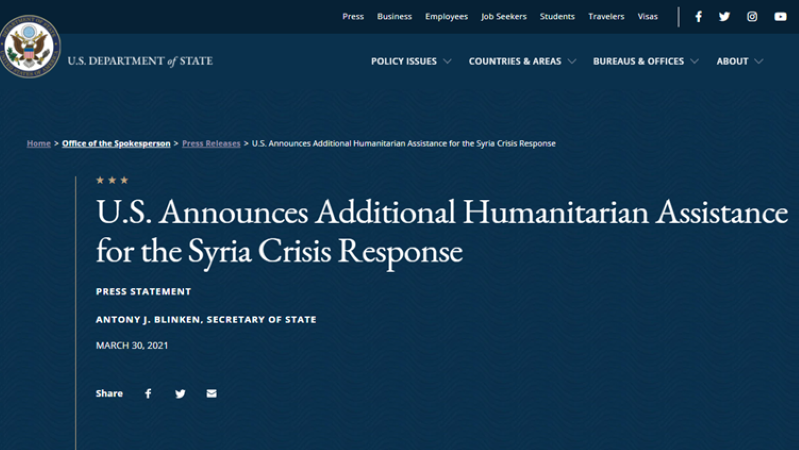 Today at the fifth Brussels Conference on “Supporting the Future of Syria and the Region,” U.S. Ambassador to the United Nations Linda Thomas-Greenfield announced more than $596 million in new humanitarian assistance to respond to the Syrian crisis. This funding brings the total U.S. government humanitarian assistance to nearly $13 billion since the start of the decade-long crisis, including nearly $141 million in support of the COVID-19 pandemic response in Syria and the region.  U.S. assistance will benefit many of the estimated 13.4 million Syrians inside Syria in need of humanitarian assistance, as well as 5.6 million Syrian refugees in Turkey, Lebanon, Jordan, Iraq, and Egypt.  We offer support to alleviate the suffering of the world’s most vulnerable people because it aligns with our values as a nation and with our national interests. We urge other donors to support the Syrian people by increasing their contributions to these efforts.

Ambassador Thomas-Greenfield also stressed the responsibility of the international community to provide unhindered humanitarian access and aid to all Syrians in need through all avenues available, including through cross-border assistance, which remains necessary to reach those in need.  The re-authorization and expansion of the cross-border mandate in July is a U.S. priority.

The Syrian people have faced innumerable atrocities, including Assad regime and Russian airstrikes, forced disappearances, ISIS brutality, and chemical weapons attacks.  Furthermore, systemic corruption and economic mismanagement at the hands of the Assad regime have exacerbated the dire humanitarian crisis, which has been further compounded by the challenge of COVID-19.

Along with our allies and partners, the United States supports UN Special Envoy Geir Pedersen’s efforts to achieve a political settlement and permanent resolution to the Syrian conflict as outlined in UN Security Council Resolution 2254.  There is no military solution that will bring peace, security, and stability to Syria, and the region.