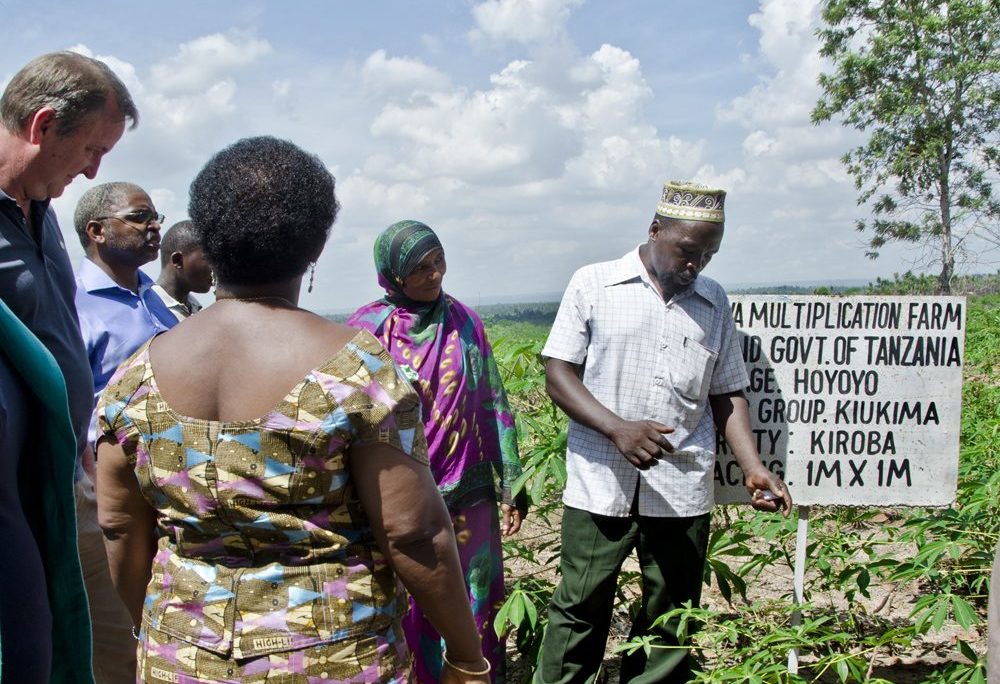 With the seven journalists accompanying me on our media tour, we said goodbye to Augustino, Fortunata, and the other farmers we had met around Arusha, and flew south to the humid, coastal climate of Dar es Salaam. We were eager to hear how the projects we had seen, along with many others across the country, are adding up to something bigger.

We spent a morning visiting a cassava multiplication project that the Government of Tanzania has undertaken in collaboration with the UN Food and Agriculture Organization (FAO). Cassava, a starchy root similar to the sweet potato, is a staple food in many parts of Tanzania.

On the way to Hoyohoyo Village, south of Dar es Salaam, we learned how diseases like Cassava Mosaic Disease and Brown Streak Disease, in addition to drought, have been severely affecting cassava crops in the region, undermining both the food security and livelihoods of small holder farmers. To tackle these blights, the Government of Tanzania, assisted by FAO experts and others, has been introducing “clean” and more disease-resistant cassava cuttings in the area. Government extension workers are helping sensitize local farmers to the risk of disease and are showing them how they can prevent it from spreading. The farmers we met in Hoyohoyo village proudly showed us the plots where they are testing new disease-resistant cassava varieties to see which does best in the local area. They have received “clean” disease-resistant cassava cuttings from the government and FAO, and they are multiplying this stock to sell to other farmers — for a profit.

The Hoyohoyo farmers are not simply interested in preserving the status quo, but like the farmers we met in Arusha, they are hungry for development and the improved living standard it promises for their families and their children. They are plowing the proceeds from their cassava multiplication scheme back into their cooperative, and have bought maize, rice, and cassava milling machines that they are using to process their crops. Through the District Cassava Farmers’ Organization, they have learned processing techniques and improved quality standards and are selling cassava flour to wholesalers and retailers at a substantial mark-up from what they would otherwise receive from middlemen. They are moving, one step at a time, from subsistence farming to commercial farming.

Interestingly, when we asked the farmers in Hoyohoyo what they needed for the future, the answer was not a better water supply or more job opportunities. The answer, without hesitation, was “entrepreneurial skills.” Like we had seen in Arusha, the technical skills small holders in Tanzania are acquiring through extension work and model farms is important, but better access to markets and value-addition is a game-changer. That is what is exciting about what is happening in Tanzania today.

Smallholder farmers want to feed their families, but they also want to sell to markets so their families and villages can prosper. That’s what Feed the Future — the U.S. government’s global hunger and food security initiative — is all about, and that’s Tanzania’s vision that we saw unfolding during our trip.

Next stop on the media tour, Malawi.