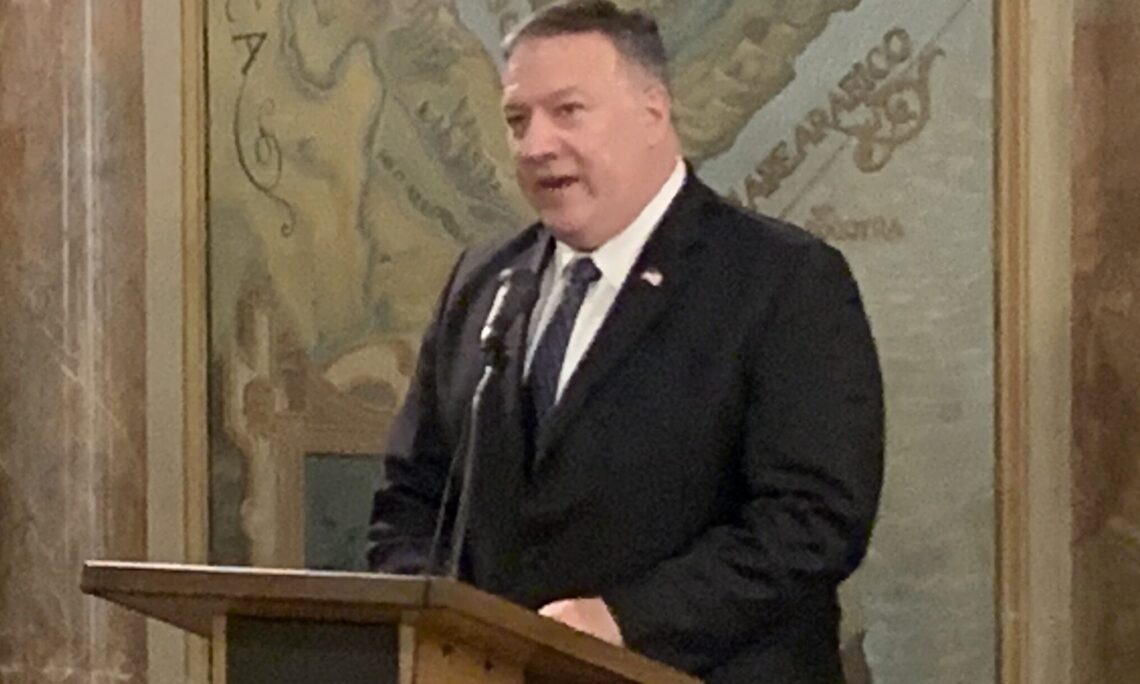 MS MALAGUTI:  So, Mr. Secretary of State, ambassador, old friends and colleagues, welcome.  Welcome to one of the oldest international organizations in the world.  We shall soon celebrate our 100th anniversary.  Welcome to – to a place of strong legal tradition, but also an organization that, building on its history, is able to address some of the most practical and critical issues of today international commerce.

Our legal instruments are the result of a continuous and open dialogue among highly reputed scholars, public administrations, and the market.  They are not the sole product of diplomats.  They respond to the needs of the market by offering solutions that balance the various interests at stake, take stock of different legal traditions, and try to offer sound and consistent solutions by benefitting of the conceptual framing of legal scholar.

Mr. Secretary, the instrument that you’ll sign today has concrete implications for international commerce.  It shall facilitate trade and legal certainty, as well as cooperation and development.  It might prove extremely useful in the current dramatic situation for so many economic players.  You are utmost welcome.

SECRETARY POMPEO:  Thank you very much.  Well, thank you, first of all, for hosting me here today.  This is an important moment.  This will generate literally tens of billions of dollars in annual economic gains for member states of your organization.  Twenty-three billion of that will go to developing countries; it will give them easier access to equipment, machinery.  That’s important to them.  Seven billion dollars will go to manufacturers, American companies – global companies like John Deere, Caterpillar, and Vermeer.  Easier access to finance critical global economic assets like this machinery will, as you said, give real opportunity to troubled people all across the world, as the world climbs out of this economically challenging time.

You should know that this demarks, too, that the U.S. is not, as some have said, retreating, but is deeply engaged.  Where multilateralism makes sense and it works and benefits the world and the American people, the United States will be an eager and aggressive participant.  And we’re proud of the efforts that have extended over now many years of the U.S. interagency team that has been negotiating this document.

I want to thank, too, South Africa for hosting this year’s event.  Congratulations, too, to the countries that have previously signed – to Nigeria and Paraguay, the Gambia, and the Republic of Congo – who moved ahead on this protocol and already benefitting from the global acceleration that will occur as a result of this agreement.  So thank you.  It’s great to be here, and it’ll be a proud moment to sign the document.

MR TIRADO:  I will certainly be brief.  Most of what I meant to say has already been said.  I thank you, Mr. Secretary.  Thanks to everyone for being here.

The MAC Protocol is the result of almost 14 years of hard work and strong negotiations by hundreds of experts from all over the world, and also by civil servants of many, many countries.  And it is the fourth episode of the Cape Town Convention.  Cape Town Convention is one of the most important and successful commercial treaties in history.  It is one which is – to which 82 states are party, which has generated business of billions, and which has already registered more than 1 million transactions only for the aircraft sector, one of the episodes of the treaty.

This time the convention will focus on high-value equipment of the mining, agriculture, and construction sectors.  And all these three sectors combined are obviously much bigger than the aircraft sector.  And seeing the numbers of the aircraft sector, we can clearly see the possible – the potential impact that this new treaty can have.  Our calculation – if you look at the scope of the treaty of the MAC, equipment covered more than 100 billion U.S. dollars in global trade for this equipment take place currently, so the potential is enormous.

As the Mr. Secretary already explained, the – there was an economic – independently commissioned economic assessment which resulted – or gave us the incredible result that over 30 billion in increased GDP altogether between developing and developed countries would result from the coming into force of this treaty.  So that is an extraordinary testament to the importance of this treaty.

Mr. Secretary, through you today, the United States are showing the path by showcasing strong support of a treaty which has the potential to become a gamechanger for international trade.  And the United States doing so in a moment in which it is most necessary and most timely.  In the middle and especially after, the huge economic crisis that we all are suffering because of the pandemic.  This is exactly when norms such as the ones that the United States supporting now will be most necessary.  So for that, we owe you thank you and grazie.

(The treaty was signed.)

MS MALAGUTI:  Just one word to close all of this.  Just to let you know that back in 1926 this was the room where all the statute of the UNIDROIT were signed, with even the Italian king at that time.  So we repeat the experience and we are really extremely pleased that almost 100 years later we are still here doing so positive and useful things for the world, for the countries, for our economies, for the industry.  So we are extremely grateful for you – to you, to having come here, having accepted to sign here even.  So this is really, for us, a big event, and thanks a lot.  You have all of our appreciation and thank.