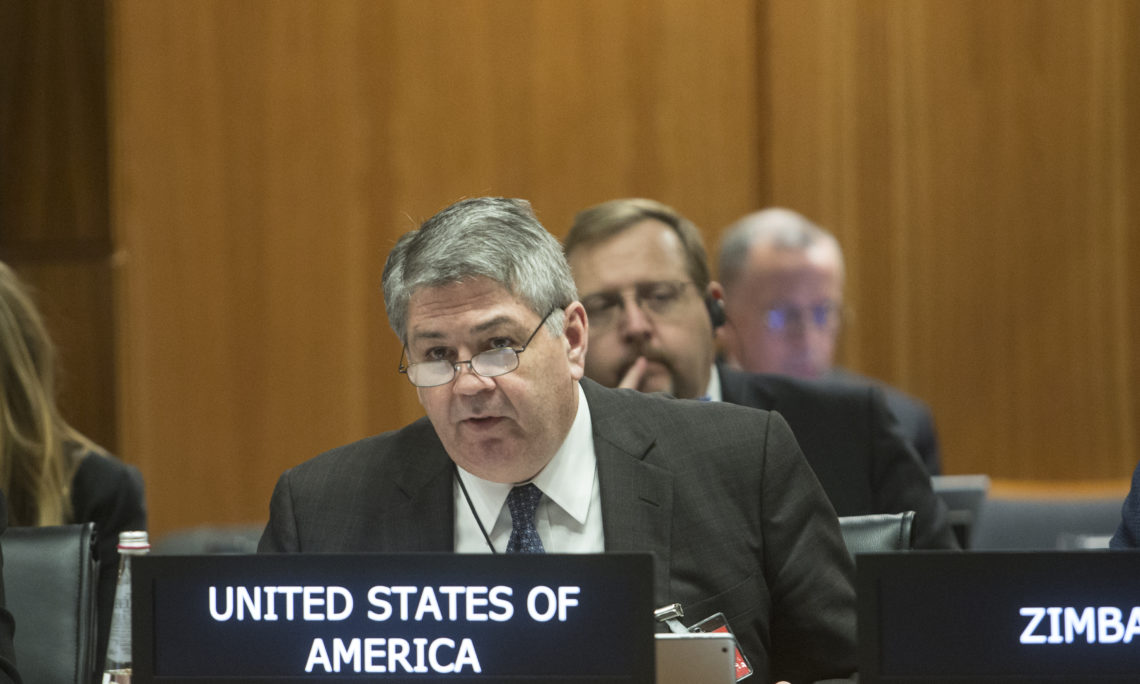 The presence of the Deputy Secretary-General at this WFP Board meeting sends an unmistakable sign of the role of WFP in the UN reform process and the importance of the UN’s Rome Based Agencies in carrying out the mission of the United Nations Organization as a whole.

Executive Director Beasley, we commend you for an excellent start, especially your tireless fundraising efforts and your clear focus on field operations.  Thank-you for your emphasis on U.S. donations this year and thanks also for List A’s kind remarks. We applaud your creativity and willingness to branch out in bringing in new resources and partners, including the private sector, to WFP. In a time of competing needs and priorities, you have been a compelling advocate in ensuring world leaders never forget about hunger and famine.  You have also made clear the link between conflict and famine and have challenged all of us to find the sustainable political solutions required to end these wars and end these famines.

We have entered a period of food insecurity not seen since the founding of the United Nations at the end of the Second World War, with 80 million people across the globe now living in highly food insecure environments.  Twenty million are in fact so severely food insecure that many of them are in danger of lapsing into famine. The burden on relief and development actors is great and the stakes are high. Governments, NGOs, and the UN System will all have to “up their game:” reducing costs, improving transparency, and better coordinating operations to improve the efficiency and the effectiveness of our response.

WFP has a deep bench of knowledgeable and experienced emergency personnel. We urge WFP to take this capacity a step further by actively seeking opportunities to staff the positions of Resident and Humanitarian Coordinators in critical countries. We consider the number of candidates proposed by, and selected from, WFP clear recognition of the value WFP brings to achieving collective outcomes, as well as tribute to the significant talent represented by WFP’s people.  At the same time, WFP must never lose sight of its response mandate and it must continue to scale up staffing and training to meet current and future demands.

We applaud WFP’s continued commitment to the challenges of reshaping its procurement and finding better ways to address and mitigate both financial and security risks. We welcome the appointment of WFP’s new Inspector General, Ms. Patricia Harvey, and the commitment WFP has shown this year to even greater stewardship of resources. This includes improvements in enterprise risk management and increased vigilance in WFP’s cash-based response.

We applaud Ramiro Lopes da Silva for his long and dedicated service, and congratulate Valerie Guarnieri on her selection as the next Assistant Executive Director.

Mr. Executive Director, we congratulate you, and the leadership of UN Food and Agriculture Organization as well as that of the International Fund for Agricultural Development, for coordinating  efforts to address food security needs and in doing so reinforcing worldwide recognition of the role of the United Nations in fighting hunger. We commend all the leaders of the Rome-based agencies for their unprecedented joint trip to Ethiopia – followed quickly by an equally unprecedented Joint Briefing to the Governing Bodies of the three Rome Based Agencies.  We also appreciate their openness to member state participation, which included my delegation traveling with you to Ethiopia. As we all know, no single agency has the complete set of skills and resources required to address global food insecurity. We look forward to continued cooperation among the Rome-based agencies and the broader UN system and partners.

We congratulate WFP’s heroic achievement in bringing assistance to over 13 million people suffering in some of the world’s most difficult and dangerous operating conditions.  Donors, NGOs and UN agencies have worked to beat back famine in parts of South Sudan.  However, the situation there remains critical, as do areas of Yemen, Somalia, and Nigeria, and the Lake Chad Basin. And let us not forget the crises in Syria and Iraq, Myanmar, the Central African Republic and the Democratic Republic of the Congo.  Worldwide, crises have left in their wake nearly 66 million forcibly displaced people, including over 22 million refugees, whose lives have been irrevocably  changed.

Since 2012, the U.S. has provided WFP with over 11 billion dollars, with almost 2 billion dollars provided through USAID in fiscal year 2016 alone, saving countless lives and livelihoods of people made desperate by disaster, famine and conflict. Additionally in 2016 the US Department of Agriculture provided just over $94 million to WFP for school feeding programs that offer a critical social safety net for improving food security, education, and nutrition. WFP has made significant strides in ensuring that host countries strengthen their enabling environments and make financial commitments to take over the provision of school meals, and we commend this effort toward sustainability.

The funding forecast for 2017 points to a record amount for WFP, but I caution that the top 10 donors to WFP this year accounted for 85% of the 2016 income, with contributions from other donors dropping in both absolute and proportional terms.  WFP’s efforts to broaden its donor base are imperative for moral, political, and fiscal reasons.

We call on all member states and the private sector to do more to address current gaps in food assistance, matching WFP’s rising level of effort with the increased support required for the organization to meet growing demands – demands coming not only from its member states, but also from the hungry and the suffering whose hopes and very lives depend on WFP. We will continue to work in partnership with others to address not only these daunting needs, but also the root causes of such staggering food insecurity.