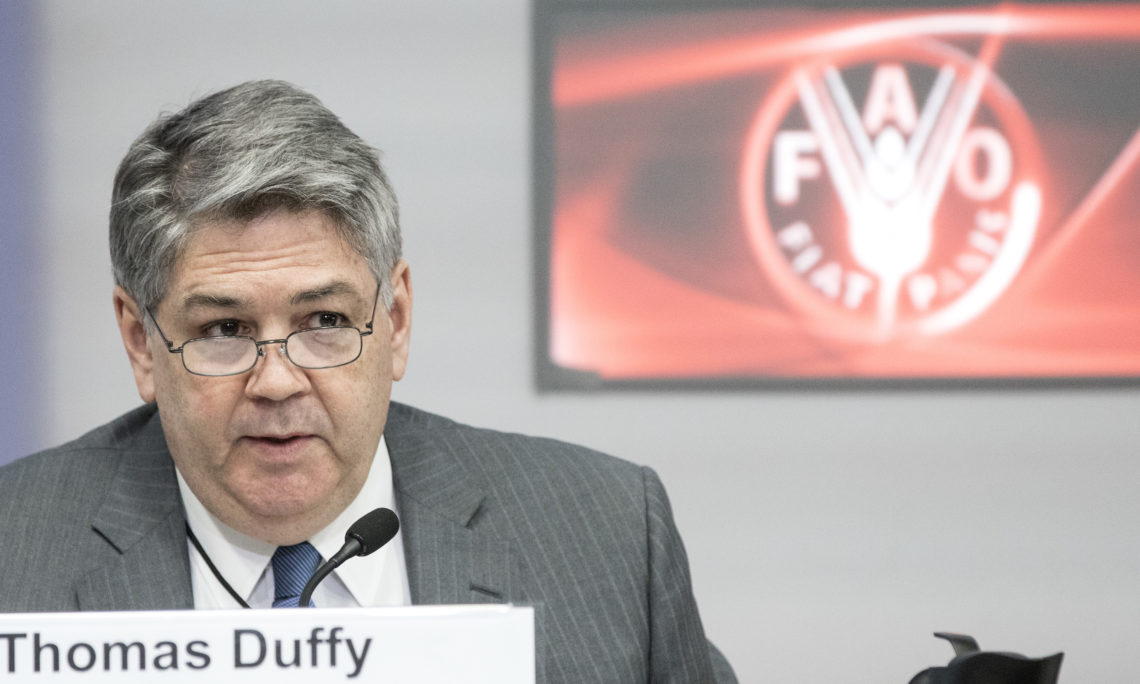 Thank you, Mr. Burgeon, for the very informative briefing, and for your team’s admirable work to help prevent emergencies and build resilience among communities affected by humanitarian crises.  And thank you to my fellow panelists for the opportunity to speak today.

The 2018 Global Report on Food Crises presents evidence that speaks to some of our deepest concerns:

the number of food insecure people is rising rapidly — up 11 percent from 2017 – and new or intensified conflicts have played a major role in that increase.

My points today are in keeping with the remarks that the US representative will deliver tomorrow in the UN Security Council, at the High Level Briefing on Hunger and Conflict, being held at the initiative of the Netherlands in their capacity as Security Council President.

As the world faces yet another year defined, in part, by the scale of severe food insecurity, it is critical that the Security Council and the United Nations Specialized and Technical Agencies, as well as the UN member states as a whole, remain seized with the matter.

Our approach must be two-fold:

First, we need to work towards ending the conflicts that are driving food insecurity and urge compliance with international humanitarian law to improve access to those in need.

Second, we should simultaneously pursue longer-term efforts that strengthen local economies and governance in countries at risk of food insecurity.

To address the most serious immediate needs, we all must do our part.  The United States is the largest provider of food assistance in the world.  Last year, our emergency food assistance reached more than 70 million people in 53 countries.  We call for all countries to step up their contributions, both financial and political.

All parts of the UN system must work together to promote stronger coordination where food insecurity is already present and a potential driver of conflict.  We are encouraged by the reforms of the Secretary-General that are pushing for greater coherence and coordination across the UN system.

We face an additional challenge:  effective collaboration and communication between humanitarian and development actors, on the one hand, and those responsible for international peace and security on the other.  For far too long, we have allowed these discussions to occur in separate spaces.

Assistance alone will not overcome situations where parties to the conflict block or manipulate humanitarian assistance.  The international community must remain a strong and consistent voice demanding compliance with international law, and call for unimpeded humanitarian access to address the risk of acute food insecurity and the risk of famine conditions.

By far the largest food security emergency in the world is in Yemen, where 18 million people are experiencing hunger.  Last week the Security Council reached consensus on a Presidential Statement calling on all parties to comply with their obligations under international humanitarian law and to allow and facilitate safe, rapid, and unhindered access for humanitarian supplies and personnel.

It is now crucial for all parties to follow through on their commitments to facilitate humanitarian and commercial access, including keeping all Yemen’s points of entry open, ensuring timely clearance of requests for vessels to berth, ending the collection – or threat of collection – of additional customs and taxes on goods, and resolving lengthy bureaucratic impediments that keep basic goods and humanitarian aid from reaching those that need it.

We also see the need for urgent action to end the conflict in South Sudan, where years of violence have transformed the world’s youngest nation into one of the world’s most food-insecure countries.  Famine was declared in parts of the country in February 2017.  While a robust international humanitarian response—including U.S. efforts—did help roll back the famine four months later, food security continues to deteriorate across the country.  This man-made crisis is a direct consequence of prolonged political conflict.  The failure to reach a sustainable political settlement makes the return of famine a real risk in the coming months.

While last week marked some degree of progress with regard to the Presidential Statement on Yemen, it also marked the seventh anniversary of the start of the conflict in Syria.  The associated violence has left 10 and a half million people in Syria unable to meet basic needs—1 and a half million more than 2017. Food prices have risen 800 percent since the conflict began.  Displacement and lack of employment have pushed 85 percent of the population into poverty.  Households are cutting back food consumption, spending savings and accumulating debt—actions that disproportionately affect the most vulnerable populations, especially children.

In Syria we see the devastating consequences of when the international community and the Security Council are not united in holding parties to account for compliance with international law.

As this year’s Global Report concludes, “no significant improvement in food security can be expected globally until peace is achieved and livelihoods restored.”  Our united and coordinated efforts can reverse the devastating trend of increased food insecurity – particularly crises that are exacerbated by the politics that drive man-made conflict.

As the only member state on the panel — and also as a member of the governing bodies of FAO and WFP – let me emphasize the importance of the role of the member states of these organizations, the need for our financial and political support, as well as our responsibilities for oversight.  But let me also stress our fundamental need for all of us to work together if – as promised in the opening words of the Charter of the United Nations – we are truly “determined to save succeeding generations from the scourge of war.”

Suggested for You
Tweets by @USUNRome

U.S. Mission to the United Nations Agencies in Rome