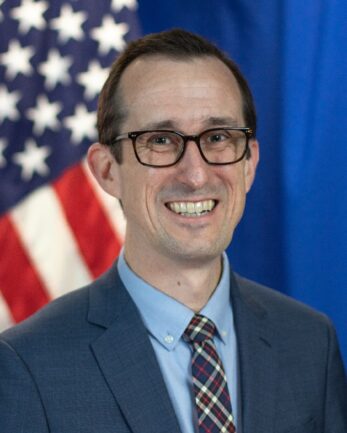 Rodney Hunter assumed duties as the Deputy Permanent Representative and Deputy Chief of Mission at the U.S. Mission to the UN Agencies in Rome in June 2022.  He joined the Department of State in 2004 and is a career member of the Senior Foreign Service.

He served most recently as the Political Minister Counselor at the U.S. Mission to the UN in New York from 2018 to 2022, leading U.S. participation in the UN Security Council focused on the maintenance of international peace and security.  Prior to New York, he also served in Finland, Turkey, Iraq, and Nepal, as well as in Washington, DC.

Rodney received a B.F.A. from DePaul University and a J.D. and M.P.A. from Indiana University.  He worked at the Human Rights Campaign in Washington, DC from 2003-2004 and served as a Peace Corps Volunteer in Bolivia from 1998-2000.  He is originally from Indiana and speaks Spanish, French, Italian, Nepalese, and Turkish.  Rodney is joined in Rome by his husband John.