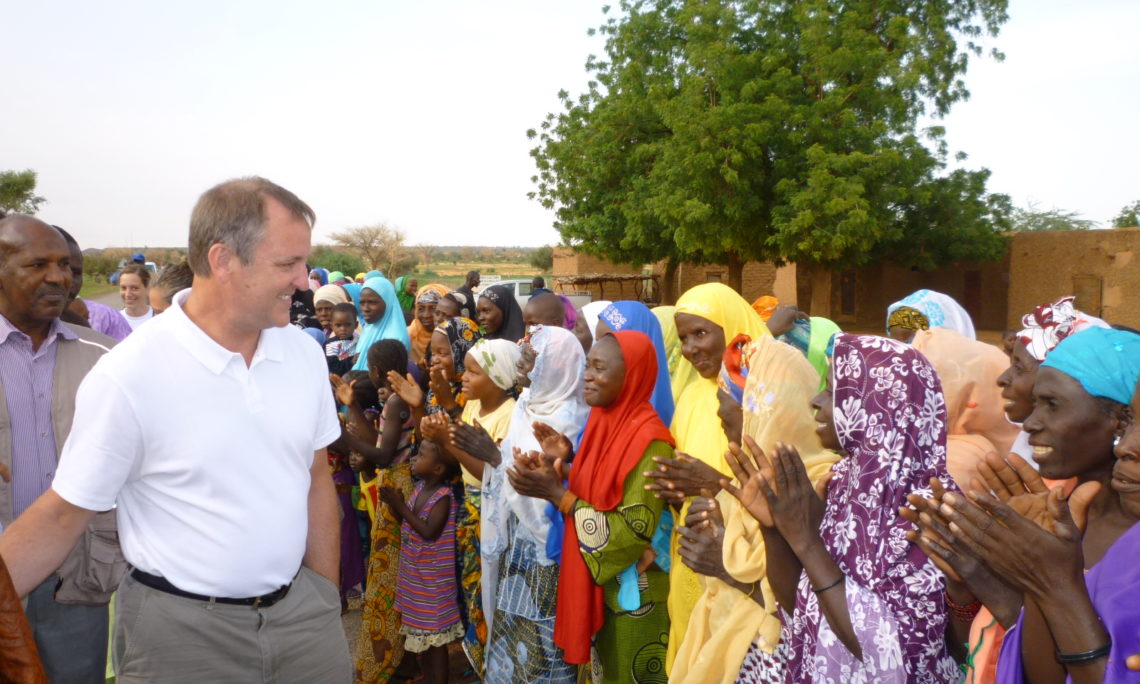 I have just returned from a thought-provoking visit to Niger, one of the largest countries in the Sahel — a region of Africa where close to 19 million people are at risk of severe food shortages.

Before I flew to Niger, I had expected the trip would leave me feeling depressed and hopeless. More than 3 million people in the country do not have access to sufficient food, and suffer — especially the children — from moderate to severe malnutrition. And for Niger, this is nothing new. For the third time in a decade, Niger is reeling from the repercussions of massive drought, this time compounded by high food and fuel costs, locust infestations, and conflict in bordering Mali.

But despite those dire statistics, I saw a more hopeful picture when I toured the country. Indeed, by the time I left Niger, I was filled with optimism and confidence in the multilateral assistance and development operations at work on the ground. Amongst their efforts, I saw the components needed to break Niger’s relentless cycle of hunger and malnutrition.

Given the immediacy of the crisis, I expected — and was heartened to see — an effective emergency response being carried out by the UN World Food Programme (WFP) — our hosts for much of the trip. They are providing assistance to over a million people in Niger, using strategies such as blanket supplementary feeding — in which all children age 6-23 months, as well as pregnant and nursing mothers are provided ready-to-consume nutritious products to forestall malnutrition — and cash vouchers, which allow people to buy food from local markets.

WFP’s efforts are also focusing on the link between relief and recovery — and that was unexpected and very encouraging.

What I saw is a recent food security concept — resilience is the buzzword — coming to life in the field. For years Niger has been snared in persistent drought and the inability to produce enough food for its population, and the cycle has thus far shown few signs of stopping. Droughts and subsequent humanitarian emergencies in 2005, 2010, and now 2012, have left Nigeriens less and less prepared for the next, inevitable crisis. This time, aid organizations are making a conscious effort to break that cycle by combining emergency support with longer-term development objectives. The resilience efforts I saw in Niger go beyond immediate food aid and fight the root causes of the current crisis by laying a foundation to better prepare communities for the next one.

In Niger, livestock are often the most valuable asset a family owns. In addition to being a source of food, they are a valuable cash asset. And yet, when small farmers don’t grow enough food in a given season — as has happened in this most recent drought — families tend to sell their livestock to purchase food, which may satisfy their immediate needs but leaves them that much more vulnerable the next time hunger strikes. With this in mind, the UN Food and Agriculture Organization (FAO), the United States Agency for International Development (USAID), Veterinarians without Borders, and the Nigerien government have joined forces to train veterinary technicians to ensure healthier livestock and expand each family’s holdings. I visited one of these training centers, “graduating” a handful of technicians from their first course on oral medicines. Each technician I met is now responsible for administering needed support to farmers within a 10-kilometer radius. They each received initial packs of medicines, which they will sell to farmers — keeping the net cash they receive as their salary. This “for-local-profit” structure makes the program ultimately self-perpetuating, benefiting the veterinary technicians in proportion to how well they provide for their community.

Crucially, this project ensures that families’ livestock will be healthier after a crisis. While the emphasis in a traditional emergency response program is on feeding the people — not the animals — this coordinated effort works to ensure the survival of Nigeriens’ most valuable asset. Because once the crisis is over, these people will need their animals to survive.

But healthier livestock is only part of the equation. The next step has to integrate agricultural productivity with market systems — and on this front a great deal more needs to be done.

In Tolkobeye, FAO is working with women farmers involved in dry land farming — which entails some form of irrigation to sustain agricultural production in the dry season. With seeds provided by FAO and the Nigerien government, these women are successfully growing crops they had never before grown in the dry season — but they lack the infrastructure and support to sell their produce after the harvest. In contrast, I visited a different group of women farmers in Tinkirhua who had fared significantly better with their dry season harvest. In addition to receiving seeds, they receive technical assistance and follow-up to focus on the post-harvest product and market. As a result, they gain both food and a cash profit from their harvest.

So it was quite clear to me that while we need to increase yields, we also need to make sure farmers have a way to sell their excess produce for extra income, income that can purchase other food for their families. What I saw in the field reinforced my belief in the importance of a comprehensive, start-to-finish approach to food assistance and development — these women need not only the seeds, but support and attention after the initial harvest (and crisis) has passed.

In these projects and many others I saw, I was impressed by how well the different UN Organizations, including FAO, WFP, and UNICEF, as well as their NGO partner organizations are coordinating their work. For a resilience program to be successful, the different organizations involved must optimize their comparative strengths and objectives at distinct times throughout the response. Crucially, the Nigerien government and local and international NGO partners were equally invested in developing combined, consistent approaches to important concerns. While there is much still to be done to break Niger’s devastating hunger cycle, what I observed were the beginnings of a comprehensive, resilience-minded approach to combating Niger’s chronic crisis.

Bottom line? Emergency and development assistance are both vital to a relief effort, and can be even more effective when integrated. I am encouraged to report that, in Niger, that’s precisely what I saw.