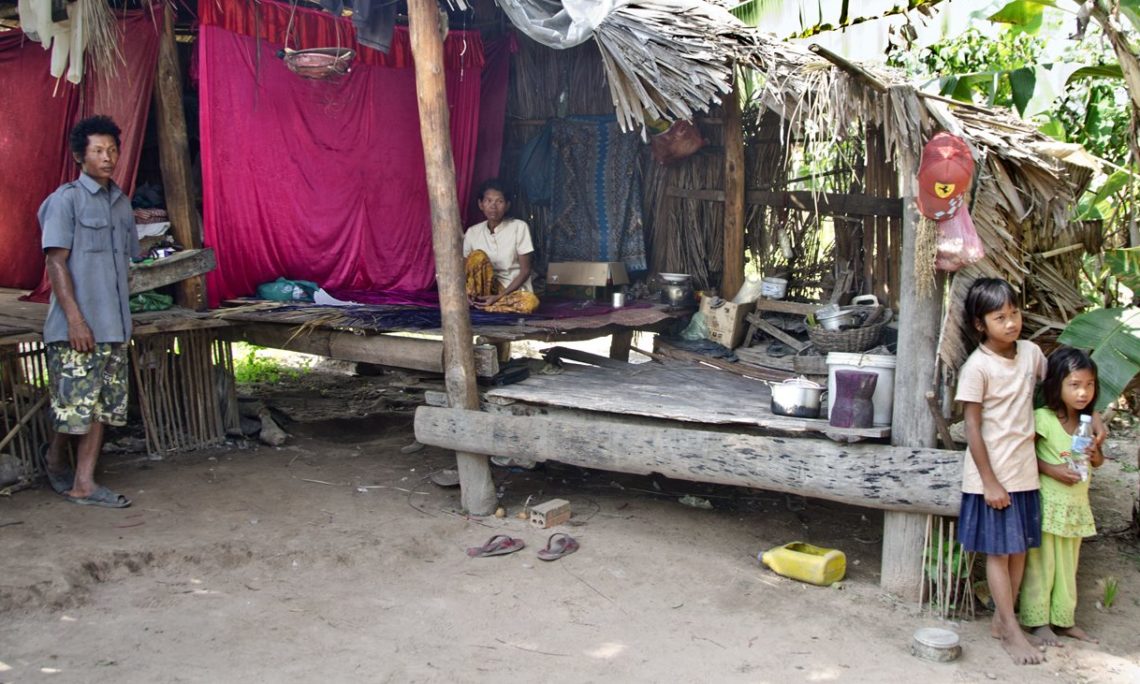 Traveling in the developing world to observe food security challenges and review projects and progress often stirs mixed emotions, and our just-completed trip through Cambodia was no exception.  Alongside the excitement of learning about dramatic gains in agriculture productivity and cautious optimism from seeing important nutrition lessons adopted, I have to acknowledge the bracing effect of meeting families that truly don’t know where their next meal is coming from. While impressed by the important progress being made in Cambodia across a range of food security issues, the plight of the poorest people I met fills me with sadness, even anger, and a renewed commitment to focus on inclusive economic growth and policies and programs that protect and empower the most vulnerable.

On our third day of field visits, I spent time with some families around Phlong village and met many who were struggling just to get through each day. When I sat with Koeum Kea Moeth and his wife Sim, I asked them what they planned to feed their daughter that day. They had to admit they didn’t know — perhaps borrow some rice from a neighbor, Sim thought. Her husband had been able to earn $3.50 per day for a little while working on aWorld Food Program sponsored road project, but that work had ended and they had no current source of income to purchase food. Sim had once been able to grow enough food to feed her family, but she had to sell the small plot of land she had farmed to pay medical expenses after an illness. Tragically, that’s the way it is for people who live at the margins — one shock or setback and the downward spiral of poverty spins out of control.

We met others like Koeum Kea and Sim, loving parents desperate to give their children a better life but at times powerless to do so. They are the face of food insecurity, not knowing how they will put food on the table in the days or even hours ahead. Often food is availablebut not accessible to those without the means to purchase it. I encountered families who face these conditions frequently in rural Cambodia.

On one level I was not surprised — after all, according to the UN Food and Agriculture Organization, 842 million people in the world suffer from chronic hunger. Yet the reality of hungry, malnourished people is still sobering no matter where you find it in the world.  In Cambodia, media accounts of dramatic economic transformation — 20 years of 7-8 percent annual growth — can confuse and lead one to believe that all segments of society are being transformed. Unfortunately, this is not true for the poorest of the poor, especially in rural settings, at least without deliberate efforts to help the most vulnerable lift themselves up.

It is hard to escape the conclusion that inclusive economic growth — prosperity that lifts up all segments of society and enables children in poor families to lead healthy, productive lives — is far from automatic, even when economies are expanding dynamically.  That’s why theU.S. Government’s Feed the Future initiative is specifically designed to achieve inclusive economic growth and sustainable impact for smallholder farmers and their families. Effective programs focused on the food security of the most vulnerable are making an important difference by improving incomes and nutrition for families in the areas where they work.  But we must not forget that transformative, lasting change requires us to sustain and strengthen political will and purposeful leadership from national and community leaders.

Those of us who cheer the major strides forward in agricultural productivity, and the increasing awareness of the importance of improved nutrition, must not lose sight of the painful reality that far too many still suffer from a basic inability to feed themselves and their families. But hunger is not hopeless: it is solvable.  We have the knowledge and the tools to end hunger. With deliberate effort and hard work, we can succeed.