Home Home | News & Events | On the Ground in South Sudan: Delivering Humanitarian and Food Assistance Against the Odds 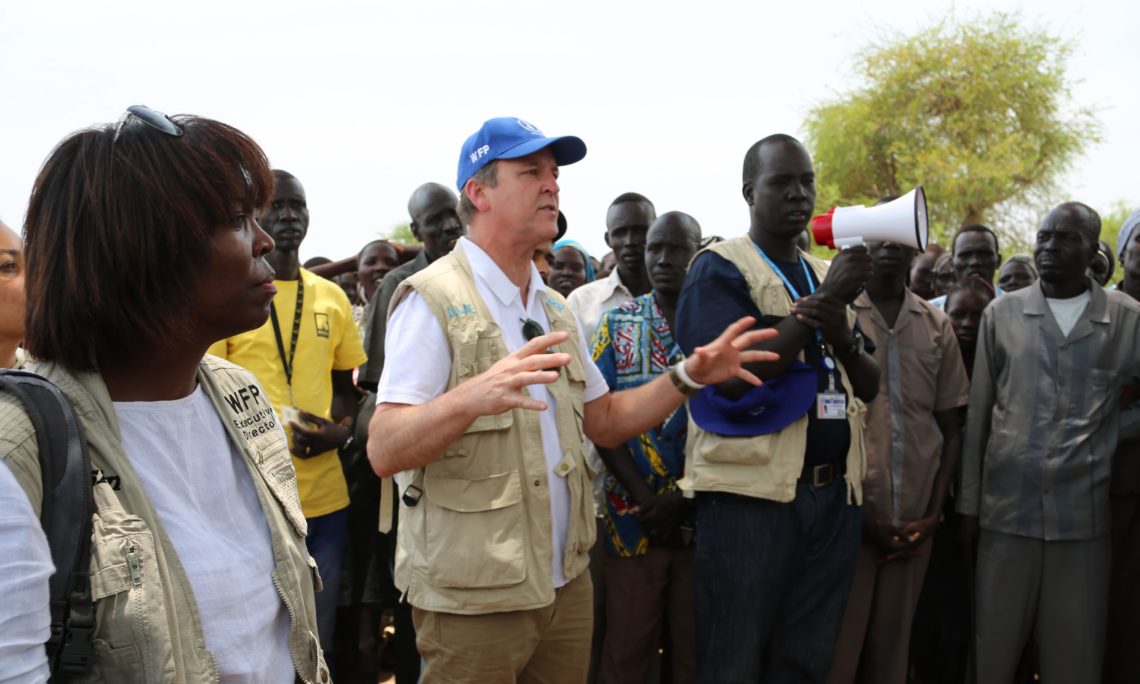 Last week, I accompanied World Food Program (WFP) Executive Director Ertharin Cousin to South Sudan to see how the world’s largest humanitarian food agency is addressing one of its most complex and pressing challenges.

As I viewed WFP’s emergency operations, I was again reminded that as much as you try to envision the lives of those millions of displaced and hungry, their reality always defies imagination.

In one village near Ganyiel,‎ reached only by small boat, a widowed mother of seven children told me how she had led her family on a three month walk of more than 200 miles in search of safety and food. The day we met she and her family were receiving their first WFP food ration and they were extremely grateful. Her shocking story was not unique and illustrates the sacrifices brave South Sudanese people are making to create a better future for their children.

Only three short years ago, the South Sudanese people saw their long struggle for independence culminate with the birth of the world’s newest nation. The current conflict robs them of the opportunity to enjoy peace, stability, and prosperity.

WFP is one of the U.S. Government’s most stalwart partners in helping the people of South Sudan, as well as in providing humanitarian assistance for Syria, Iraq, Central African Republic, Ebola-affected countries and other crises around the world.

But as attention shifts from one emergency to the next, pressing humanitarian crises fall under the radar.  Director Cousin and I went to South Sudan to renew attention to the extreme challenges there and to encourage other donor governments to do more.

Over one and one-half million people have been displaced inside South Sudan, to escape the fighting; over 100,000 people have sought refuge on United Nations compounds.  An additional 500,000 people have fled the country and are refugees in Ethiopia, Kenya, Sudan and Uganda.  Despite the herculean efforts of WFP, neighboring countries, and the humanitarian community, the situation is grim, with hunger at emergency levels, and expected to worsen in coming months.  Projections suggest that roughly 2.5 million people in South Sudan will suffer acute food shortages and require assistance.   Inevitably it will fall to WFP, along with other humanitarian organizations, to feed the majority.

In South Sudan, WFP is acting courageously and creatively, using every means in its power to get food to the hungry, despite personal risk and the challenges caused by conflict, weather, and limited infrastructure.

When roads are passable WFP delivers as much food as possible by truck, internally and across borders.  When rain renders roads impassable, air drops of nutritional supplements save lives.  The recent re-opening of the Upper Nile river corridor allows the transport of food by barge.  Currently, the roads are good, so WFP is prepositioning food, in anticipation of the approaching lean season.

As the U.S. Ambassador to the UN Agencies in Rome, I follow the work of WFP closely. But seeing their operations and listening to people there reminded me that WFP is a world-class operation often called upon to do the impossible.

The United States Government has generously supported humanitarian efforts in South Sudan, contributing close to one billion dollars in humanitarian assistance since the December 2013 conflict began.  However, the logistical challenges specific to South Sudan and the conflict there make it one of the most expensive humanitarian operations in the world today, and the operation remains substantially underfunded. We need others to join with us to mitigate this crisis.

During my short trip to South Sudan, I met many mothers — making heroic efforts to feed and protect their children.  Our humanitarian response must be worthy of their sacrifice and commitment, and I’m proud to say the WFP’s efforts on the ground embody this spirit.

About the Author: Ambassador David Lane serves as the United States Representative to the United Nations Agencies in Rome.