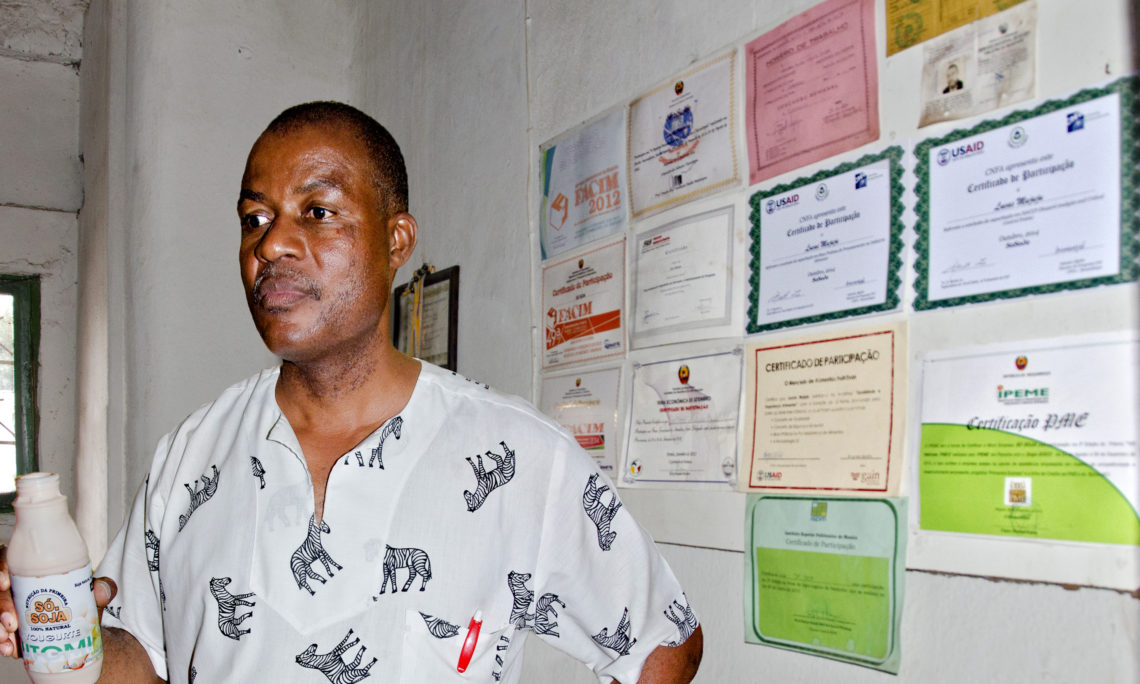 Farmers in Mozambique, like those in other developing countries I have visited, consistently said they want one thing most of all – to move beyond subsistence farming to a modern agricultural economy.  They seek business skills to improve and diversify their production, so that they can increase their incomes and provide more opportunities for their families.  At almost every stop, I heard about the acute need for the physical and financial infrastructure and commercial environment that will make this possible.  Mozambican farmer and entrepreneur Lucas Mujuju is an example of how this can work.

In 2009, Lucas started a small business he named Só Soja (Only Soy) that produces and sells a soy-based drinkable yogurt. I had the opportunity to tour the modest two-room building where he makes and stores his product — and to hear Lucas describe his vision for Só Soja.  Lucas started with a simple business proposition: to produce and sell an affordable, nutritious and tasty drink using a reliable and easily sourced local product — soy. Soy yogurt is ideal for rural Mozambique, because it provides high-quality protein, and does not need to be refrigerated, making it a safer protein source than milk, under local conditions. After selling yogurt in cups outside his business, Mujuju’s business has grown each year and he now distributes his products through local shops, and also sells his protein-rich yogurt drinks to local schools and hospitals. At this point, his main constraint to expanding sales and distribution was the processing equipment that he uses.

Lucas needed to find a way to finance the expansion of his production, but access to finance in Mozambique is still very limited. He also needed help in putting together a longer-term business and marketing plan to guide his company’s growth.  As part of “Feed the Future,” the U.S. government’s global food security and nutrition initiative, the USAID-supported Global Alliance for Improved Nutrition project helped Lucas with technical certifications, marketing research and product packaging.   Lucas then turned to AgDevCo, a social impact investor, to raise the capital he needed.  Lucas projects that with these investments, he can expand output from 70 liters per day to an impressive 80 liters per hour, helping his business to grow at least 20 percent annually for the next five years.

What interested me was not just Lucas’s success in producing and marketing his product, but also the multiplier effect a successful agro-processing business like Só Soja has on the community. In a country where a large share of family income still goes to food, Só Soja provides families, schools, hospitals, and mining companies with a locally produced, lower-cost option for improving nutrition and dietary diversity. It also increases stable and sustainable demand for high-quality, locally-grown soy, which is an incentive for improved farming practices and increasing farmers’ incomes. Só Soja uses 15 outgrower farms to source its soy. These outgrower farmers will earn an additional $1,100 per year as Só Soja expands production and purchases more soy — a noteworthy amount in Mozambique, where GDP per capita was roughly $580 in 2012.

The Só Soja example illustrates that our efforts to increase agricultural yields and family incomes for small holder farmers will only be transformative if we simultaneously stimulate demand for smallholder production through value chains and simple agro-processing technologies. That means our efforts have to extend to helping small agribusinesses thrive — by improving access to affordable financing, developing business skills, and reducing transaction and startup costs. The smallholder farmers I spoke to in Mozambique are eager for these opportunities. Given half a chance, Mozambicans like Lucas Mujuju can revolutionize the agricultural sector in Mozambique.