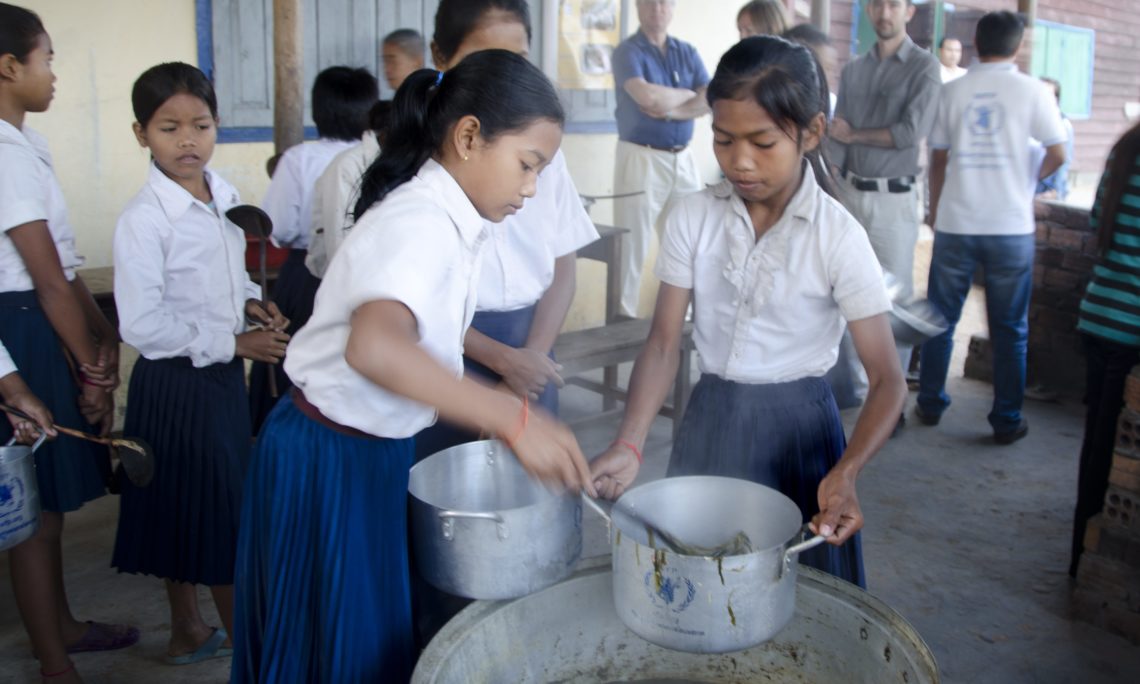 As I traveled throughout Cambodia with a team of journalists from Asia to learn about innovations in agricultural development, I was struck by the presence of beautiful, smiling children.  Yet I could rarely guess a child’s age.  A handsome boy I thought was 10 years old announced he was 15.  A mother proudly reported that her daughter was eight years of age, when my first guess was five.

I was dismayed to learn that up to 40 percent of children in Cambodia might not reach their full potential due to a condition referred to as stunting.  Stunting occurs when a lack of nutritious food limits a child’s growth and development.  While I had heard about the effects of stunting, I was not fully prepared for the reality of this alarming statistic in Cambodia.

I’m happy to report though that I also saw programs that are addressing this problem.  TheWorld Food Programme (WFP), with support from the U.S. Department of Agriculture’s McGovern-Dole Food and Nutrition Program, is changing this picture for many by serving free meals at primary schools that have particularly high numbers of children from poor families.

We visited Wat Run primary school, one of 1377 schools participating in the program. When I arrived, students were lined up facing the school’s porch, each with a bowl in one hand.  Parents were behind the school stirring huge pots, filled with rice, or a mixture of fish, beans, oil, salt, supplied by WFP, and green vegetables donated by the families or grown in the school’s garden. The meal was carefully designed to provide nutrients that many of the children lack; at home they often eat little other than rice.

Soon some of the older children began serving generous portions of rice with the vegetable fish mixture.  After eating, the children washed their dishes at the school’s water pump, before settling down to study geography or spelling.

Although the number of children in Cambodia who regularly attend school has increased as a result of the free meals, many still drop out after grade three, because their labor is needed to help support the family.  To enable students to study longer, WFP offers a reward to the poorest school children in grades four to six, as long as the child continues to attend school.  Some families receive food — 10 kg of rice per month — which stretches the family’s food resources for two weeks or more, while others receive the equivalent amount of cash.  They can spend the money on whatever they choose, however since they are the poorest of the poor, they do spend most of it to buy food.  The students I met proudly showed me their certificates, which showed that they were contributing to their family’s health by attending school.

But we also know that we can’t wait until children are five to improve their nutrition, as their earliest years are critical for development of both their minds and bodies. In a program that we observed in Wat Kandol village, WFP provides special micro-nutrient rich and energy-dense foods for pregnant and lactating women and children below two years of age.  Approximately forty young women sat on a mat playing with their children and talking with a doctor about nutrition, including the importance of exclusive breastfeeding for the first six months of their baby’s life.  Then, following a demonstration on how to prepare the “super-cereal”, each mother collected her month’s supply, loaded it on a bike and headed home.

As a result of programs like this, I am hopeful that the next generation of Cambodians will be better nourished, moving their country toward a more prosperous future by being better able to contribute to their own and Cambodia’s future.