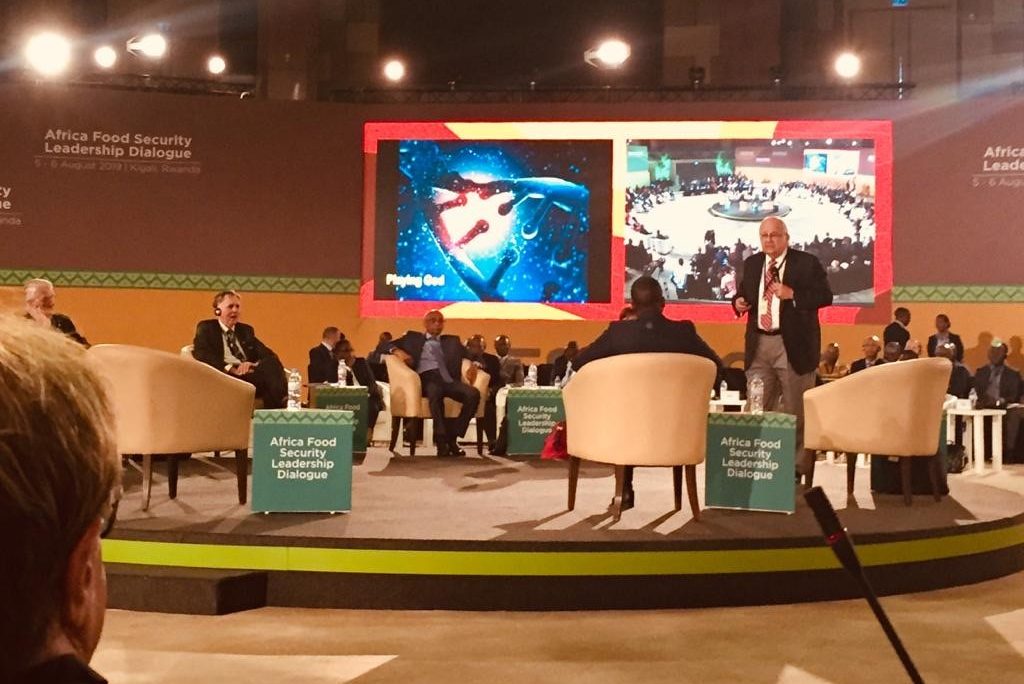 Partnerships were a key theme on Ambassador Kip Tom’s recent visit to Rwanda.

“Agriculture by nature involves risk, but by leveraging knowledge, science, and new tools, we can reduce those risks,” noted Ambassador Tom in his remarks, underlining the framework that structured the Dialogue.

The AFSLD was convened by core partners, including the African Union Commission, the Food and Agriculture Organization (FAO), the International Fund for Agricultural Development (IFAD), the African Development Bank, and the World Bank, in conjunction with the Rwanda Ministry of Agriculture.

The high-level meeting facilitated engagement between key stakeholders with the goal of galvanizing unified action to advance progress in achieving food security, and adapting Africa’s agriculture and food systems to the consequences of climate change.

Ambassador Tom participated in a round-table on leveraging partnerships, while further engaging farmers in the conversations and linking them to industry-changing innovations and financing.

Among suggestions for a more inclusive and resilient African food and agriculture system, a number of speakers, including two Nobel Prize winners in Physiology and Medicine, presented their own scientific and evidence-based findings on biotechnology’s application in agriculture.

The use of GMO crops that are drought and pest resistant, or nutrient enriched, could be a game-changer for agriculture in Africa according to several speakers, who illustrated the advantages of growing Bt corn that is resistant to Fall Army Worm, or Golden Rice that prevents Vitamin A deficiency.

Following the AFSLD, Ambassador Tom had the opportunity to visit three UN development projects that illustrated the potential of partnerships in boosting the African food and agriculture sectors and stimulating local economic development.

At the Banana Wine Plant in Kayonza, that has support from IFAD, 70 people have found employment producing banana wine – a traditional drink.  The plant plans to increase the number of employees to 200 and expand production to include banana rum, gin, and juice.  Along with employment opportunity, the plant has created a new market and income opportunities for banana growers in that region of Rwanda. When the processing is over, the banana peels are donated to local farmers for compost.

In the Special Economic Zone outside Kigali, Ambassador Tom visited a Silk Processing Plant and a Super Cereal Production Plant. Both are creating impressive opportunities for smallholder farmers.

The Silk processing plant – a partnership between the Government of Rwanda, Korean investors, and IFAD – buys cocoons from over 4,400 regional farmers to produce some of the highest quality silk in the world.

The Ambassador’s final site visit was to Africa Improved Foods (AIF), a fortified food production facility, providing a local solution for a local problem. AIF processes more than 45,000 tons of high-quality maize and soybean into a fortified blend that is currently used to nourish more than 1.5 million children in Africa.

The facility buys at least 50% of its raw materials from local farmers and the World Food Program (WFP), a key partner, purchases 80% of the AIF’s final products for its nutrition programs. Contributing to the private sector development, AIF also works with WFP to provide quality assessments that promote food safety standards throughout the region. Any profit AIF makes that is above a basic commercial return is given back to the Government of Rwanda to fund further nutritional programs.

It was evident throughout the trip that Rwanda continues to “stand out as a country showing leadership through its strong history of investment in agriculture, as well as fostering progress in linking farmers to markets”, said Ambassador Tom.